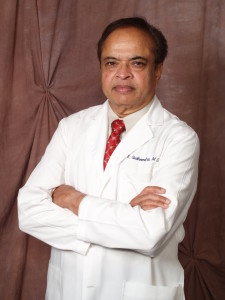 Dr. R. Sudheendra is a board certified surgeon and a graduate from the Mysore Medical College, located in Mysore, India. The Mysore Medical College is a medical school of 85 years standing, and has produced outstanding medical graduates since its inception. Dr. Sudheendra completed an approved surgical residency at New York Methodist Hospital, which is now a teaching hospital attached to Cornell University. He became board certified in general surgery in 1971.

While in New York, Dr. Sudheendra held a clinical instructor position at the State University of New York’s Downstate Medical Center. He later completed a fellowship in cardiovascular and thoracic surgery at Louisiana State University School of Medicine and Charity Hospital in New Orleans, Louisiana. He was a clinical instructor in surgery while at LSU. He practiced cardiovascular and thoracic surgery at Hamot Medical Center in Erie, Pennsylvania up until 1976, when he moved to Trumbull Memorial Hospital in Warren, Ohio. Dr. Sudheendra has excelled as Chief of Cardiovascular and Thoracic Surgery at Trumbull Memorial Hospital until July of 2007, when he retired from the practice of surgery and devoted full-time to the practice of venous diseases and treatment of varicose veins.

Since his arrival in Warren, Ohio, he has been affiliated with both Trumbull Memorial and St. Joseph’s Health Centers. He is currently the Medical Director of the Vein Center of Northeast Ohio in Warren, Ohio, where he dedicates his full-time position to the treatment of varicose veins, spider veins, Chronic Veinous Insufficiency (CVI) and other complicated venous disorders with the Covidien Venefit™ Procedure (formerly VNUS® Closure), microphlebectomy, Endovenous Laser Ablation using the CoolTouch Laser, sclerotherapy, microphlebectomy, ligations, and Veinwave treatment.

Honored By The Following Institutions